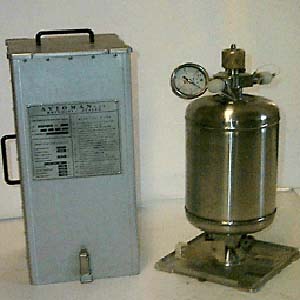 The purpose of the sampler

It is to take a small portion of liquid oxygen from storage containers , refueling and board .

The sampler , complete with a special carrying case , is then used eg send said specimen , now in the gas phase , the laboratory in charge of his analysis to assess the rate of contamination of the container current championship .
Principle of operation

The equipment logic is based on the principle of operation of the cup autoraffreddata. It is in fact the same liquid gas to be sampled that, before it is placed in the cup of withdrawal (innermost container), is made to flow to the pressure (5 to 20 psi) bleeding from the converter cavity, directly communicating with the environment , between the inner wall and the outer (intermediate container) of said cup, resulting in gasification and extraction of heat from the walls. This condition is maintained until obtaining a flow of oxygen still liquid from the drain. In this cooling stage, the opening of the inlet valve enables the filling of the cup with only liquid oxygen.

Once enclosed, the valve and stop the flow of oxygen to the sampler, liquid oxygen, subjected to ambient heat, passes slowly in the gas phase pressurizing also the outer body intercommunicating with cup.n solo ossigeno liquido.